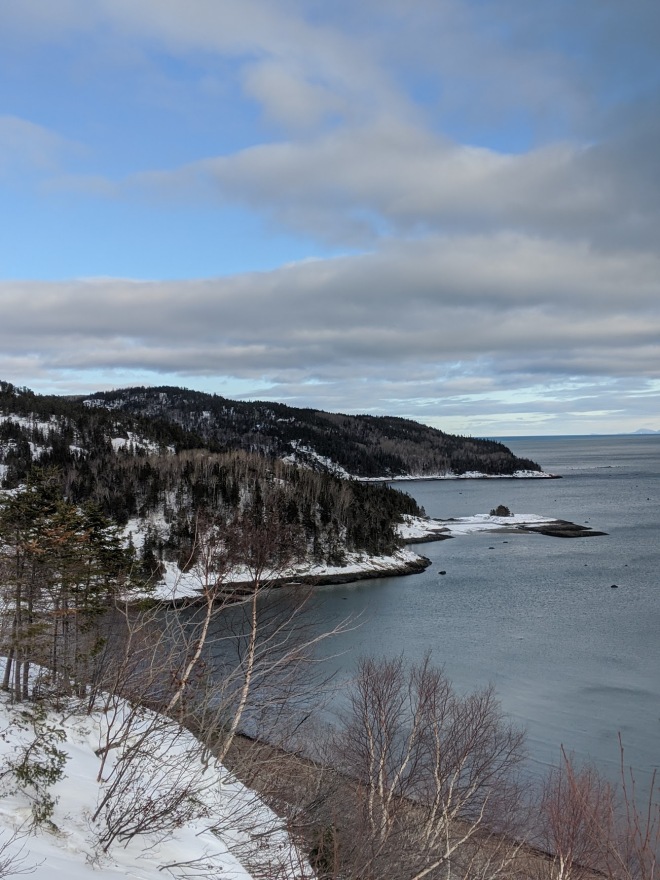 The year of 2020 started for me with a trip to the north of Quebec. Our friend Manon arrived from France just after Christmas and wanted to experience regional Quebec so we decided to take her up north.

Before we headed to Tadoussac in the north where we hoped to see belugas and whales, we stopped at the chalet of my parents-in-law, which is located in the Mauricie National Park. There, we did some snow shoeing in the New Years Day and skated on the lake where the chalet is located.

After celebrating the New Year’s at the chalet, on January 1st we headed up north to Tadoussac, where we planned to spend our first night and take a ferry to cross the St. Lawrence river the next day. Not far from Tadoussac, we rented a small “yourte” which was fully heated by the fire stow and we had to keep up adding the wood during the day to make sure that the fire does not die. The “yourte” did not really have running water or shower but it did have some nice views from the windows which were almost the full height of the “yourte”.

After our night at “yourte”, we headed to the sand dunes in Tadoussac but they were frozen so there was not much sand. We did find though some impressive views of the river and hills there.

Our last big activity of the day was taking a ferry through St. Lawrence river with the hope to see some belugas and whales. In fact, this was the last ferry service before the next tourist season so we really could not afford to miss it. Luckily, it was not crowded and we managed to get in. We did not get to see any wild sea animals but it was still quite impressive to see a huge ferry (which by the way takes 65 minutes to cross the river) cut through the huge blocks of ice.

We spent our night in Rimouski and as I was working most of the morning, I skipped the activities there but joined the group for the trip to the Bic National Parc. The entrance fee is around $CAD 9/person and you can walk as long as you want. There are also options to rent cross-country skis but we decided to just walk around. The weather was great that afternoon with around -2C and no wind which was not typical for the area but very pleasant for us.

After Bic, we had dinner and tasted some local beers at the Tête d’Allumette Microbrasserie brewery. I especially enjoyed Kölsch there.

The next day, we headed to Quebec City and spent the morning there exploring the old streets and enjoying breakfast. The weather was great as well – no wind and mild temperatures made it pleasurable to walk around.

Our evening we spent at Valcartier park sliding down on the inflatable inner tubes. We spent a few good hours there before dinner and it was a fun activity that you can do as the team of four (if you, like me, are scared to slide down alone).

After slides, we had the late night dinner at the local brewery and next morning headed for our very last destination which was Parc des Chutes-de-la-Chaudière. It is a beautiful park with waterfalls where you can walk on the hanging bridge with a wonderful view. Before we could get to the park though, I had a little accident with my shoes which literally fell apart. They did not manage to get through Canadian winter!

Luckily, the stores were open so we managed to find replacement quickly and headed to enjoy the falls.

This was our short trip in the north of Quebec. In Eastern Europe, we often say that you will spend the year in the way you start it. It looks like 2020 might bring some adventures.