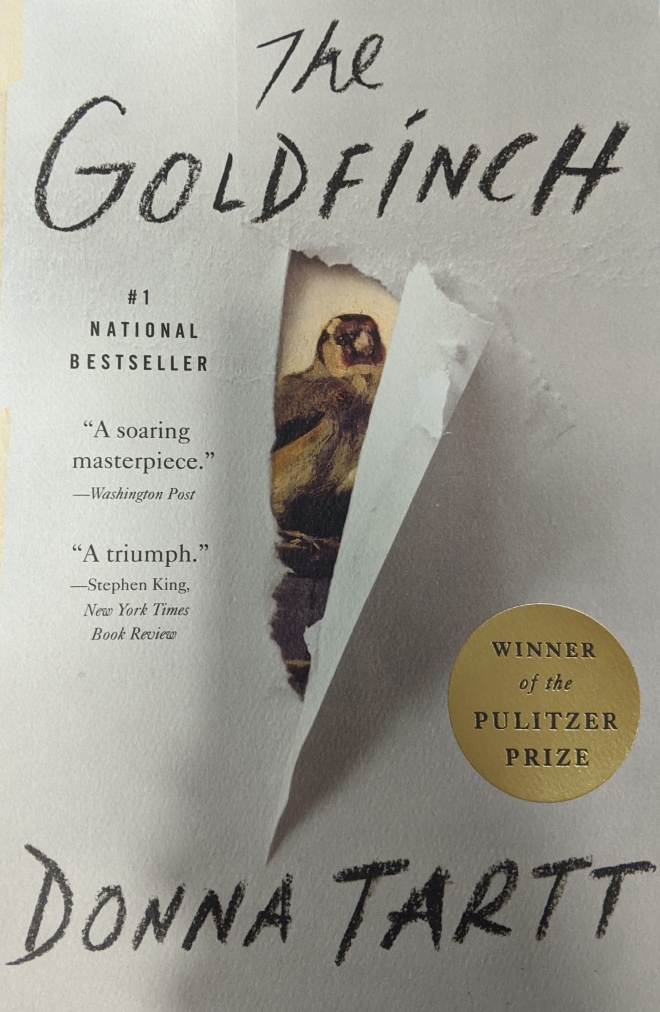 “The Goldfinch” by Donna Tartt

As I mentioned at the beginning of the year, my goal for this year is to read more. I generally do not like the contemporary fiction and read mostly either popular science or classics but I decided to pick up the “Goldfinch” by Donna Tartt to diversify my reading list. I feel like with contemporary fiction it is often a gamble – you either have a gem or it is all mess. I read a lot of classic literature so I am usually putting a high standard for what I read and that’s why not many contemporary fiction makes it there.I think what got me to pick up this book is that it won the Pulitzer prize so I thought that it probably has a high writing quality and also that the book was described as “Dickensian”. Charles Dickens is one of my favourite classics so the contemporary interpretation of his style lured me in.

“Goldfinch” follows the live of the Theo Decker, a 13-year-old New Yorker whose mother loves art. They go to the art exhibition before going for a meeting at Theo’s school (he got suspended) to see the world-famous paintings including the one by Carel Fabritius which is called “Goldfinch”. During their visit, there is a terrorist attack with the explosion at the museum where Theo’s mother dies. What a spin on Dickens, is not it? When Theo wakes up after explosion in the half-ruined museum, he sees the old man, Welty, who tells Theo to take the paining with him before he leaves the museum. Theo keeps the paining and gets out of the museum which get the whole chain of the events that lasted for a decade started.

He sets on the journey of grief, comfort and beauty and addiction – he stays with the rich Barbours who kept him because his father disappeared from his life, he stays with his father who is an addict and gambler, he meets Boris who sets him on the path of addiction and later proves to be the real life-long friend, he falls in love with Pippa who was in the same explosion and suffered the same trauma and they have so many things to talk about but can not be together, and he gets sheltered by Hobbie – Welty’s partner, always wise and always kind man who is ready to accept Theo no matter what. Theo goes through all layers of American society – I guess that’s the part of Dickens in it. But all of this somehow ties back to “Goldfinch”.

I generally enjoyed the book very much. I found the writing not hard to follow, the cultural context well researched and there were times when I could not put the book away. I would only make it slightly shorter to keep the dynamic of the took – around 300 pages out of 700 were mostly about Theo doing drugs with Boris.

Theo dealing with the loss of his mom:

“And maybe I was coping awfully well, I don’t know. Certainly, I wasn’t howling aloud or punching my fist through windows or doing any of the things that I imagined people might do who felt as I did. But sometimes, unexpectedly, grief pounded over me in waves that left me gasping; and when the waves washed back, I found myself looking out over a brackish wreck which was illuminated in a light so lucid, so heartsick and empty, that I could hardly remember that the world had ever been anything but dead.”

“And the farther I walked away, the more upset I got, at the loss of one of the few stable and unchanging docking-points in the world that I’d taken for granted: familiar faces, glad geetings: hey mantino! For I had thought that this last touchstone of the past, at least, would be where I’d left it. It was weird to think I’d never be able to thank Jose and Goldie for the money they’d given me – or, even weirder, that I’d never be able to tell them my father had died: because who else did I know who had known him? Or would care? Even the sidewalk felt like it might break under my feet and I might drop through Fifty-Seventh Street into some pit where I never stopped falling”.

“I’ve been thinking a lot about what Hobie said: about those images that strike the heart and set it blooming like a flower, images that open up some much, much larger beauty that you can spend your whole life looking for and never find”.

And my favourite – Theo’s reflection on life after his journey:

“That life – whatever else it is – is short. That fate is cruel but maybe not random. That Nature (meaning Death) always wins but that doesn’t mean that we have to bow and grovel to it. That maybe even if we’re not always so glad to be here, it’s our task to immerse ourselves anyway: wade straight through it, right through the cesspool, while keeping eyes and hearts open. And in the midst of our dying, as we rise from the organic and sink back into ignominiously into the organic, it is a glory and privilege to love what death does not touch”

Reading “Goldfinch” reminded me a lot of “Catcher in the Rye” – I could not relate to the character but observed it with the curiosity that lasted throughout the book. If you are looking for some good contemporary fiction, “Goldfinch” is a great choice.