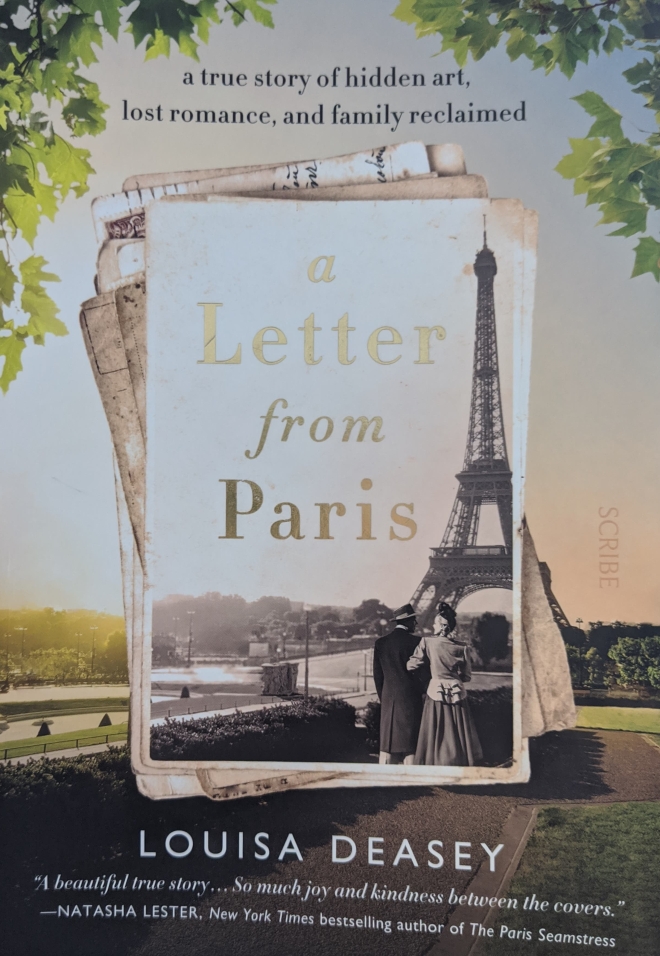 “A Letter from Paris” by Louisa Deasey

“A Letter From Paris” by Louisa Deasey is the second memoir that I read this year along with “Educated” by Tara Westover. The reason why I picked this book was mostly because it involved France and travelling in Europe in 1950s and “oh so Bohemian” vibe. I did not regret my choice!

I really like the memoirs because they are the real stories of real people – and that is always fascinating to me: all the turns your life can take if you let it. And now, you as a reader, have the privilege to trace that life step by step along with seeing the grand picture of where that life led you. It is a retrospective but such a real one.

“A Letter From Paris” is one of the memoirs of that kind. Louisa, who lives in Australia, never really knew her father who died when she was 6 years old – her had was 64 at that time. In her family, her father was always perceived and considered as a fortune waster and in a way an underdog and she felt a lot of shame when she was asked who her father was. She never really knew so she was living the story she was told. Until one day when she got a Facebook message from a women named Clementine from France – it mentioned her father and a women named Michelle who was in love with him (Clementine’s grandmother) in 1950s and the letters from Michelle that she found mentioning Louisa’s father.

From what moment on, Louisa sets on a journey of exploration to find out more about the life of her father – he was involved a lot with the artistic milieu of Australians in Europe and most of his papers were actually kept in the library in Melbourne as he himself was also a writer. Louisa set to the library to go through her father’s papers to find out more about his life in France that eventually led her to France and rediscovering her French family. It is exciting but at the same time a complex book to read – all the nights Louisa spent in the library going through numerous boxes of her father’s files, the feelings of guilt and shame that eventually transformed into admiration and excitement, the discovery of the French family and the final trip to trace her dad’s journey in France.

I liked this book because it did not avoid complexities – Louisa mentioned in her memoirs that she did not feel often at home in Australia because people brushed off the complex discussions and feelings compared to France where she felt people were ready to discuss all the angles of life. I liked that sentiment in the book – I often feel like that too searching for my own authenticity in Canada. I somehow could very well understand what she meant. Maybe I was supposed to live in 50s the “all so Bohemian” life? 😉

As usual, below are a few of my favourite quotes:

“I was popped up on the bed as the lights flickered on in the little apartments across from me in the square; Parisians appeared by the windows of their little spaces, some pulling books of a shelf to read underneath a lamp. One lady, in a beautiful dress, draped herself out of the window to smoke her cigarette, while someone else played a saxophone in a room nearby. Each was alone, and none of them looked lonely. “

“I pondered the French way of only revealing the meaning of a sentence at the very end, how it spoke of their whole approach to life: too complicated, not afraid to be complicated, going the long way round. Most English speakers – and many bilingual French – consider the language too difficult because it doesn’t get straight to the point. Dad adored the French language, and in many ways, piecing together his life had been as complicated and indirect as his favourite language.”

“The shame and uncertainty about dad that I’d felt back in Melbourne was as unfathomable an idea as Rodin’s work being ugly. Maybe art isn’t about acclaim; maybe the real treasure is actually recognition by our kin. By the people wi matter, those strangers you immediately recognize as one of your own, whether you meet them in person or just get to view their work. Those similar souls who have a flick of the eye, an untameable part that can’t be held back. Something inward that’s pushing them forward, that sense of the importance of individual creation. The sense of soul freedom that all art embodiesL the most honest and unique part of the spirit, the part that is immortal.”

“Like most stories, as you start to unpick them, the truth depends on who you ask. But his letters and papers told me what drove him and what he was always chasing: beauty and truth, something outside the mundane. The beauty and truth we both value so deeply, the stories he loved to write down.”

I read several reviews of this book before picking it up and many mentioned that they gave a lower rating because the context was centered in Australia and because many figures mentioned in the book were not known to the North American public. I do not think it is a fair criticism though. I think it is a perfect opportunity to learn more.