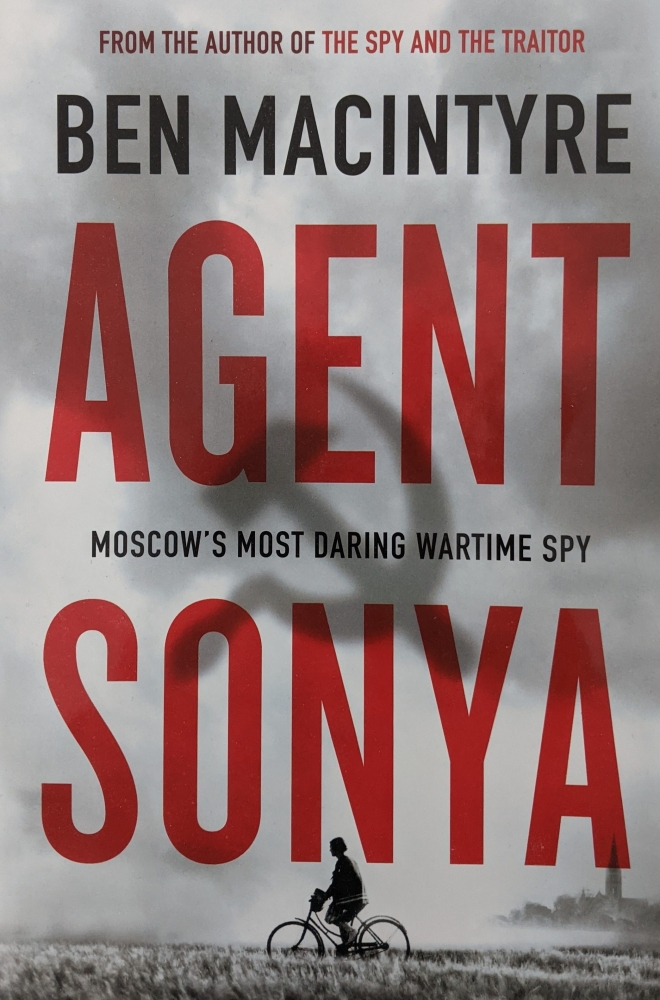 Breastfeeding gives you remarkable amounts of passive time – at first, I was using it to play games on my phone or read news but then I realized that it is a great opportunity to do something productive so I started reading. This is how I finished “Agent Sonya” by Ben MacIntyre.

I originally picked this book a month or so ago and started reading it in my last few weeks of pregnancy. The description of the book said that it is about the life of one of the most famous Soviet spies in history and I sort of expected some spy fiction but the book turned out to be a biography. At first, I was a bit upset with this as it was not what I was looking for but when I started reading, I got sucked in.

The book itself is a biography of Ursula Kuczynsky, or agent Sonya, a Jewish woman who was born in Germany right before Hitler came into power. Ursula was a daughter of university professor, one of the most renown German statistician and opposed fascism by joining the communist party in Germany. This is how her journey of being involved with communism started. Later on, she moved to China with her husband Rudi, who will later also become a spy where she met Richard Sorge who was building the communist spy network in China. At first, Ursula would just offer her house as a place for meeting since it was easier for her to disguise it as a housewife and later, she would be recruited as a full-fledged spy and would get training in the USSR on how to assemble transmitters, send message to Center and withstand interrogation.

Agent Sonya would spy in China, Poland, Switzerland and England and would go on to become one of the highest ranking officers in the Red Army. She would also be the one who would smuggle all the nuclear bomb calculations from the West to the USSR during the Cold War through her network maintaining a gentle world equilibrium. She would raise 3 successful children in the meantime and write about 14 children books under the pseudonym Ruth Werner in her retirement. And also she would be unbelievably lucky to never get caught.

I liked this book a lot – the writing style with quotes from Ursula’s diaries were great addition to the book alongside with the light reporting style the author chose. I also liked it because of how different and interesting Ursula’s life was! When we hear about women in 1940s – 1980s, we often have this image of housewives staying at home and cooking dinners for their working husbands. And yet, here is a fascinating story of a woman who chose, despite any time constraints, to live otherwise – who travelled the world, from the USA to Asia, who was highly trained in the art of espionage and who raises a family in the meantime. I loved the character of Ursula Kuczynsky, she is definitely someone to admire:

“Ursula Kuczynsky was not a feminist. She had no interest in the role or rights of women in the wider world. Like other independent-minded women of her time, she has entered a male-dominated profession and excelled at it, using every possible advantage that her gender gave her. She was impelled by ideology, certainly, but hers was not the sort of communism adopted over sherry in warm Cambridge common rooms by faddish middle-class English undergraduates in 1930s. Hers was a faith born of painful personal experience: the savage inequalities of Weimar, the horrors of Nazism and a world that left babies dying in the streets. She was ambitious, romantic, risk-addicted, occasionally selfish, huge-hearted, and tough as only someone who lived through the worst of twentieth century history can be. She was never betrayed. Dozens of people – in Germany, China, Poland, Switzerland, and the United Kingdom – had ample opportunity to expose Ursula, and bring her life and espionage to a swift and unpleasant end. None, save Ollo, ever did. For a die-hard communist, she was exceptionally good fun, stylish, and warm. She had a gift for friendship, an ability to inspire enduring loyalty, and a willingness to listed and support people whose opinions were radically different from her own. As a revolutionary, she was surprisingly open-minded. She knew how to love and how to be loved. Like all great survivors, she was fantastically lucky.”

If you are looking for some exciting and inspiring biography to read, “Agent Sonya” is definitely worth checking out.