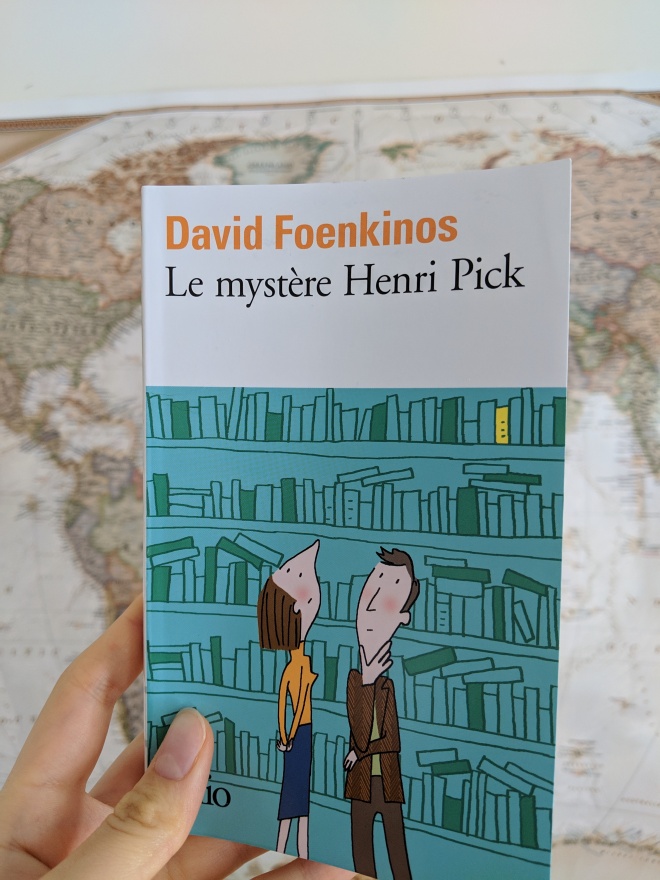 “La mystère Henri Pick” by David Foenkinos was the second book that I read in French since I started learning it a few years ago. I found it in one of the local bookstores when looking for a card to send to my friend who has just welcomed her first baby boy. The cover of the book said that it is supposed to be a detective comedy. After I peeked inside the book, the language seemed to be at the level that I would be able to read without checking the dictionary so I picked the book up. I thought it would be a good push for my French.

And it was – I finished the book within a week! The language indeed was close to conversational French, slightly above intermediate level and was easy to follow for a language learner who is just starting to move towards advanced French. There were no long intimidating sentence or convoluted expressions – the book is written in a simple, condense, straightforward manner and as a non-native reader, I could appreciate that very much.

The plot itself was interesting enough to keep me engaged until the last pages of the book, although the first part did not feel as dynamic and was mostly focused on introducing the characters that would play important roles at the end. The story takes place in Crozon, a small town in Bretagne where a librarian, Jean-Pierre Gourvec, has created a library of “refused books” – the books that no editor wanted to publish. On one summer day, a young editor Delphine who was in Crozon to visit her parents and worked in an influential publishing house in Paris comes to visit that library with her boyfriend Frederic out of curiosity. Among those refused books, they find “Les Dernières Heures d’une histoire d’amour” which turns out to be an extremely well-written book. And the manuscript has the name of Henri Pick on it.

Henri Pick was an owner of a local pizzeria who died two years ago so the young couple starts investigating who wrote the book and how it ended up in that library. Later, the book gets published and becomes one of the most read books in France but the mystery of who is its author remains until the end of the story. I am going to keep that mystery as well and leave it for those who would like to read the book on their own.

Happy Mother's Day!
Kat version 2.5 is here today. Quarter of a century if you will. I don't have any special words of wisdom to say, because as you guess, it feels pretty much just like any other day. This is not the birthday that I wished for, being locked in the quarantine, I was supposed to be in England today. But if I learned anything in the past 25 years is that life is complicated, and complex and can go unplanned and take turns and twists. That does not mean that you can not enjoy the ride 😉 I stole this picture from @correliebre so all the credit goes to Sam for pretty much getting the essence of me in one picture. Off to the next quarter of the century!
04.04.2014 and days go by and things change and we are still here like the only constant
🍕 anyone? I think that we should all upgrade our delivery experience from now on.
Panamanian street food & Jupiter team 🌮
No comments needed
%d bloggers like this: