Last week, we had a chance to visit the first open sky planetarium in Sutton which is about an hour and a half drive from Montreal. The planetarium is called Observétoiles and is founded by National Geographic

. I came across the planetarium ad on Facebook by chance – one of my friends commented on a post related to it which showed on my feed.

Although personally, I am not a huge fan of stars watching as I am usually getting eaten by mosquitos on summer nights, Nicolas loves stars. Since his childhood, he was going to his summer house on the shore of the St.Lawrence river almost where it falls in the ocean. There, the sky is indescribable. Plus, at the Observétolies, the sessions involved 3D sets so I thought it would be a great surprise for him.

After about an hour and a half of driving through hilly roads that ran around lakes, we arrived to our destination. In was a spot well hidden in the forest – high trees surrounding the planetarium seats. We got there half an hour earlier so we had a chance to explore around and play with the 3D headsets before the show started.

Essentially, the headsets had two modes – one of them showed the solar system and the planets while the second one involved constellations. That to say is when you would move your eyes around the sky wearing the headset, it would show you which constellations the stars belonged to.

The show itself lasted close to an hour – part of it was the explanation of different plants and fun facts about those and the second part was related to star constellations. The scientist who gave the presentation also had a laser with which he was pointing to the stars and explaining the patterns which was great – besides from each of us being in our own headset, we also got some real-life conversations. Although we were in the middle of the forest, it did not feel cold as the seats at the planetarium were heated. 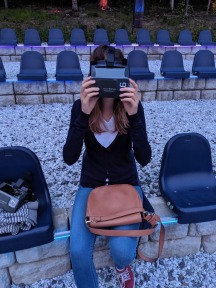 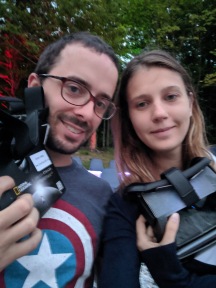 Although I was not a huge fan of star watching before, this made a nice evening. Being in the stillness that evening, made me think of this quote:

The stars are the land-marks of the universe.

🍕 anyone? I think that we should all upgrade our delivery experience from now on.
Panamanian street food & Jupiter team 🌮
No comments needed
Getting a hang of my Spanish skills.
Took one too Wink @rosiemenezes
Run Kat, run! This time on skis ❄️
%d bloggers like this: