Quebec City Half-Marathon: To My Grandfather

This May, I ran my first ever half-marathon in Longueuil, Quebec and after the run, I decided to do one more half-marathon this year. Since my summer was busy and I was planning a lot of travel, I knew that it would be hard to do a run somewhere in September. Hence, my choice fell in the middle of October so that I would have time to prepare and the weather will be still warm enough to run outside. All these factors combined, my running location was decided to be Quebec City.

To prepare for the race, I mostly worked on my speed, similarly to the last time, and also did a trial run of 18.5k, the week before the actual race. My main issue with the preparation is that two weeks before the race was very stressful for me which manifested itself in the random cramps in my stomach almost every day for 10 days before the race. Luckily, they went away and I did not have during the race.

On the day of the race, the weather was great for running: it was 11C, with no wind (Quebec city is known for its fast and cold winds which can make running very difficult) and cloudy sky. I was glad that there was no sun as I prefer to run long distances in a rainy and cloudy weather.

Once the race started, I realized something that I did not take into account and it was the elevation gain. Quebec City is hilly and the first 10K, we were running up and down the hills with an elevation gain of 186 while my usual training elevation gain is 6. Yes, it was 180m up and down more than I usually do! This meant that my heartbeat was going up and down reaching its limits. To explain, the acceptable heartbeat for the running for me is 170 or so and the maximum acceptable for my age and weight is 196. At some point during the race, I realized that I was at 195 which meant for me a point close to collapsing. I managed to bring it down but the whole race, it was close to 185 which made it extremely challenging to finish.

The other part that made the race difficult was the emotional aspect. Today is the birthday of my grandfather who passed away from Alzheimer disease three years ago and who played a very influential part in my life (I wrote about him in my post called In Memoriam. He left). I had to pull myself together many times during the run to make it through so I can only dedicate this race to him now.

I also can not be more grateful to my spouse, Nicolas: he was my biggest fan, my chief supporter who ran some parts of the race to with me to cheer me up (in those cases, even a few meters count), was my cameraman, my driver, pretty much anything to help me finish it. 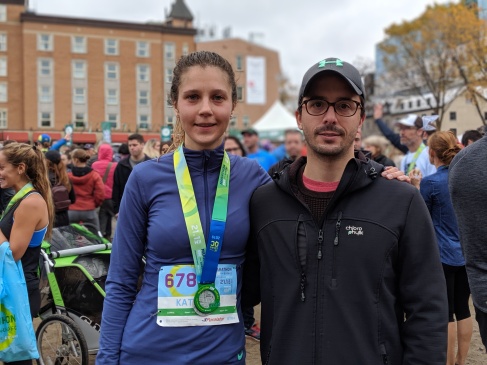 During the last 4k, the only thought that I had in my mind was that I need to quit, stop, break. My brain kept on telling me to give up and that I can’t: my ankles were hurting from doing hills, my heart rate was too high and I was getting to my exhaustion point.

I realized that if I keep on listening, I will cave in so I took a strategy from meditation to concentrate on my breath and just focused on that. I tried to separate myself from my thoughts. I kept on moving and here I was at the finish line. So the biggest lesson was: you are not your thoughts, you can be more and do more.

Will I do this ever again? Definitely. So many times!