In some of my previous posts (here and here), I mentioned that we spend our holiday this year in Slovenia. We rented an Airbnb in Portorož for a week: it was a full house with a kitchen, two bedrooms and a great yard that was overlooking the sea. Although the pictures on Airbnb did not look very convincing, the place was great – clean, with all amenities and with the lovely garden. In the garden, we had a table right under the olive tree as well as the tree with tangerines and persimmons. We never had our meals inside as the garden was just a perfect place for enjoying suppers and observing the sea. 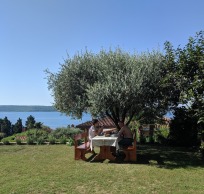 What did we do most of the time? Swam, ate, played cards on the beach and napped. Classic! At the beginning of the trip though, on the very first day, I had an accident when I slipped on the stairs that led to the sea (always, always hold to the sides of the stairs), hit my head on the rock and lost my consciousness. I did not realize what happened until a few minutes later when I came back to my senses: instead of standing, I was sitting and could not figure out why with the tears streaming down my face from the pain shock. Luckily, I did not break anything and only had a few large bruises but those did not worry me much as I knew that they will go away. Although everyone was worried about my fall, I was fine the next morning so we decided to continue vacation as planned.

On one occasion,  Nicolas and I rented a kayak one time and spent two hours kayaking in the sea. It was fun to be out in the sea, with the breeze hitting your face and freshwater drops hitting your body among August heat. We were tempted to cross the bay where we were swimming but we were without safety jackets so we decide to stay closer to the shore.

One the other occasion, we also rented a paddle-board: we both tried it for the first time and it was so much fun. It is much harder than you think to keep the balance! We flipped over a few times and I could not stop giggling. At some point though, it was not for laughing: Nicolas was in his glasses and when we flipped, he realized that the glasses were not on him anymore. He dove back right away to pick them up and luckily, was able to grab them just on time.

One of the activities that we did was also walking to the city of Piran, one the old small town 30 minutes away from Portorož, where we picked up some fresh fruits from farmers and my parents got some fish. Have you ever tasted the fresh figues right from the tree? They taste like heavenly drops of honey! After getting some fresh produce, we also stopped at a small cafe and all got a gelato. For breakfast! Oh well, that’s a vacation, right? 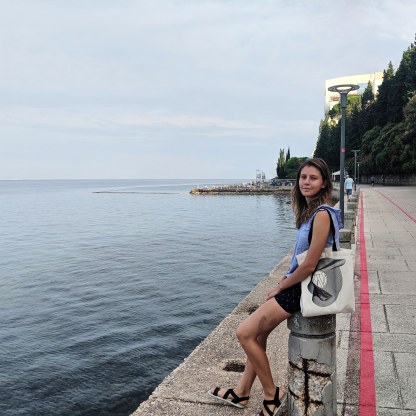 Piran itself reminded me of one of those small French cities in Normandy on the shore of the Atlantic ocean. It has a lot of small yachts, locals hanging around and enjoying the sunshine and overall, sea city vibe.

And yes, we did cook the fish that we got: I am not sure what kind was it but my father loves fish and, he marinated it for two days before we cooked it with his secret spices. It was one of the best fish dishes I ever tried (although it looks sort of scary on the picture). 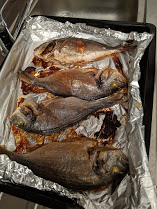 Speaking of food, we usually cooked at our Airbnb but we also went out for dinner a few times. The food was amazing – generous Mediterranean servings with lots of seafood cooked in fresh olive oil.

My Parents Enjoying The Seafood

That’s about it! Ah no, forgot one thing. I also ran in Slovenia: every two days, I woke up at 6am, ran on the beach pier that goes for a 10k along the seashore and after, dipped myself in the fresh morning sea. It was one of the most blissful moments ever: the absolute harmony and peace. Bliss!

Thank you, Slovenia for this beautiful time with the loved ones, I will surely be back.